My youngest daughter, Amelia, reminded me of something I often preach, but recently forgot. As you can see in this image, the giant Jenga structure was leaning near the top. She couldn’t find a vulnerable block to remove, so she began carefully removing a foundational block.

I told her, “Amelia, you can’t remove that piece; the whole stack will tumble!” But, she kept at it anyway, calmly and slowly. Danica and I were shocked that she was able to remove it and the tower still stood.

There were two things at play here. First, she believed, based on the thickness and the size of the blocks, that she could be successful removing an end piece. Secondly, she wasn’t afraid to try. 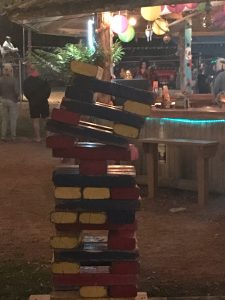 I can confidently say that Danica and I are not afraid to try things. The things we have tried and failed at in our business are evidence of that. We consider these experiments expensive seminar fees on how not to do something. However, we knew that if they didn’t work out we would still be ok. We would simply learn what didn’t work. If we didn’t try, how would we learn?

In that moment, Amelia was testing the waters and trying a different way. She was successful. It was a proud parent moment. Even when we were telling her she was making a mistake, she tried it anyway.

It is a great reminder of what limiting beliefs can do to people. How many things could we have accomplished if we didn’t hear language to the contrary? How many more inventions could there be in the world?

Here’s to the innovators and pioneers who have fought through their critics. You are the world changers!

ACTION PLAN: For one week, when a person shares their ideas with you, get curious and respond with, “Tell me more!”

Sometimes, all it takes is a little inspiration.

Understanding where others are coming from is critical in communicating and working toward a common cause.