Even Pirates Had Rules!

I mentioned a few weeks back about my trip to the Florida Keys. I toured a museum honoring the 1985 discovery of the Spanish ship, Atocha. It sank in the 1600s with what is valued now at a billion dollars in “pieces of eight”, silver and gold. The museum also shared information about pirates. Here is the display about pirate Bartholomew Roberts’ governing rules.

He was known to have run a tight ship with loyal followers. If you read this list of rules you will notice that every person on the ship is addressed, including the musicians. Yes, they had rules to follow as well. Each man knew how much they would get paid, how to behave and what would happen if they got injured. They even had a rule for overcoming conflicts between two people (I wouldn’t recommend it for your company). 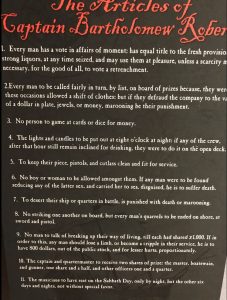 Company employees need rules as well. Many companies call these rules “core values” or “beliefs”. The best, like Captain Roberts, are action-based rules. They tell you what to expect. Do you have rules in place that people live every day where you work? It’s part of creating a deliberate culture for your company. When culture and strategy combine, something amazing can happen. One without the other is like a one-winged bird. It cannot fly.

Get after it! We can help you get started.

ACTION PLAN: What five rules would you have for your company?

Sometimes, all it takes is a little inspiration.

Understanding where others are coming from is critical in communicating and working toward a common cause.